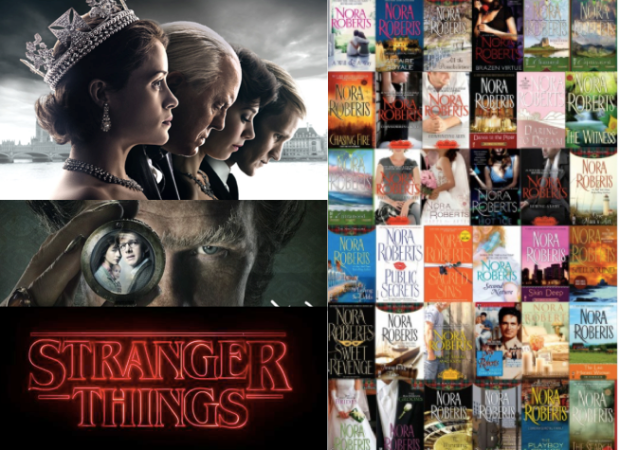 The work days are getting longer and my days off seem to get shorter and farther between. I truly feel as though I haven’t accomplished anything that is not work related over the past month and my free time has been filled with a sort vegetation that zombie’s would be proud of. I get home, my onesie is adorned, and my ass is planted on the couch to either binge all night on Netflix of to bury my nose in yet another mindless book that has absolutely no educational or universal value whatsoever.

So what have I been binging my nights away on Netflix with? A few new series and one that I’ve been meaning to watch for quite some time now. Let’s start with The Crown. Now I won’t give anything away for those who haven’t seen it yet, but this is one of the most amazingly produced shows I have ever watch. I believe it when they say it’s one of the highest production values of any show ever. The sets, costumes, music; everything is absolutely spectacular. Although I studied history in university I’m not well versed in the British Monarchy, so I can’t attest to the truth and accuracy of this story. But either way it is incredibly enjoyable. The actors are incredibly well chosen. Second is the much anticipated Series of Unfortunate Events. Surprisingly I never read these books as a child, so I have nothing but the movie with Jim Carey to base this off of. Of course it’s much better than the movie. Odd at every turn and according to those who have read the book, it’s very true to the writing. Once again Neil Patrick Harris is deemed a genius. I can’t wait to see what season two has in store.

And how have I not watched Stranger Things until now?!!! I watched the entire first season in the shortest time span I’ve ever watched a show. A true binge. I loved every second of it and I wish I could go back in time and watch it for the first time all over again. Seriously the best show I’ve seen in quite some time. Amazing. And very deserving of the awards the cast has already started racking up this awards season!

When it comes to books I’m almost embarrassed to share my recent reads with you. I dove into the realm of Nora Roberts romance novels and somehow I’m stuck. It started right after I got engaged as my Grandma lent me her “Bride Quartet” Nora Roberts series as a cute right of passage. But seeing as she had an entire library of Nora Roberts I just kept borrowing and borrowing. I’ve completed Vision in White, Bed of Roses, Savour The Moment, Happily Ever After, Chasing Fire, Reflections, and Dance of Dreams. I’m obsessed. Please, literary people, save me! I see no end here! I want more!!

What have you been watching and reading lately?

This sleepy girl is settling in well. #puppiesofinstagram #beaglesofinstagram #beaglepuppy #steviebudd
Sorry, not sorry for the puppy spam. Little Stevie (@emilyhampshire ‘s namesake) has been the best thing to happen to our little family over this crazy year and a half. My sweet girl is home!
My new puppy Stevie comes home today so I’m taking advantage of a quiet morning in bed. The calm before the storm. Please prepare yourself for non-bookish puppy posts.
My shelves are so happy today! The third Simon Snow by @rainbowrowell arrived today!!