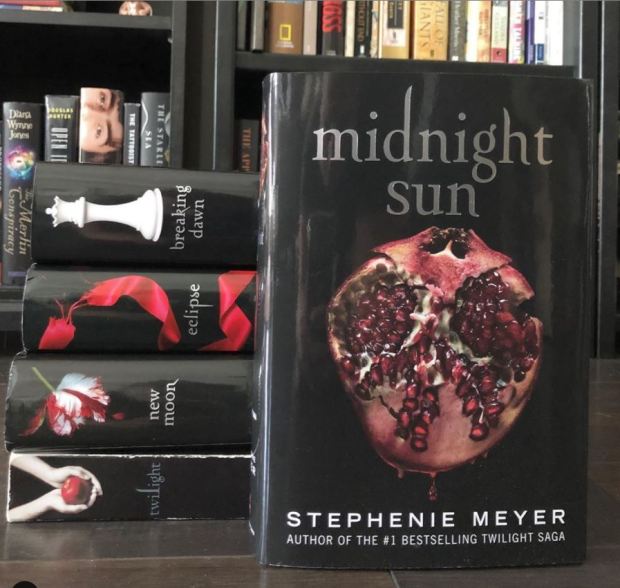 I’m sure none of you are surprised to see me reviewing the most recent addition to the Twilight Saga. Since it’s announcement in May, 2020, Midnight Sun has been highly anticipated by anyone who lived through and thoroughly embraced the original Twilight fever – the Twihards; fighting over Team Jacob or Edward, reading late into the night by flashlight, and lining up for movie releases. My friends and I at 15 were no exception, we were obsessed.

The first thing to keep in mind when diving into this book is that it IS a Twilight book. So if you’re not a fan of sparkly vampires, binge-worthy teen dramas, and a sub-par writing style, then maybe leave this one out. And don’t ruin it for the rest of us. Also, I suggest not rereading Twilight in preparation…..

Okay so let’s get into it. The Plot: IS THE EXACT SAME AS TWILIGHT.  So please don’t expect anything new. The premise of this book is that Stephanie Meyer has rewritten the first book of the series from Edward’s point of view, rather than a new story. Hence my suggestion to not reread the original in preparation, which I did – I kinda felt like I reread it twice in a row. That aside, it’s certainly interesting to gain an understanding of what Edward is up to all those times Bella isn’t with him. But of course, since Edward can hear thoughts and is a self-depreciating vampire, the story takes on a very broody and horrifically sad vibe as Edward is in a constant battle with himself. Remembering the original text, Edward seemed perfect and flawless in Bella’s eyes. And although I’ve come to realize how much of a truly freaky stalker he was, we come to realize he really is a complex and messy individual; a total deviation from the first 4 books of the series.

One thing I really loved about the book was the humanization of Bella. Having insight into Edward’s thoughts as he gets to know her has made me realize that she isn’t as boring as she seems originally. Maybe I’ve been marred by Kristin Stewart’s lack of personality in the films, but I’ve always thought Bella was so boring. I get it now; and maybe this was the hope of the author originally. Smart Stephanie Meyer, you’ve made me like the worlds most boring female character.

It’s also cool to get to know a totally different side to all of the other characters as well. We get to know each of the Cullen’s better and have insights into their relationship with Edward. And we also realize how crappy all the human’s are as we get a constant commentary on their thoughts through Edward – seriously, none of them really have any thoughts that aren’t petty, jealous and self-serving.

The book isn’t amazing, by any means. These books are written as binge-worthy teen dramas and that’s exactly what they are. But the nostalgia of the story for Twilight fans is enough to make this book so exciting and creates an experience rather than a story. I embraced the experience and loved it.

Did you know I love YA Fantasy? This one is taking me for some loops! I love finding new worlds to escape into
For those of you who keep asking what I’m doing this weekend....this is the answer.
My book club is meeting tomorrow and I haven’t started yet...January was sooo busy! Settling down today with this one and so excited!!
Today is #bellletstalk day. Why is mental health not talk of as often as physical health; why, in 2021, is there still a stigma?