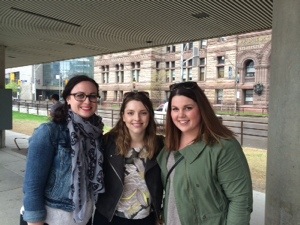 Yesterday was a pretty cool day. Estée, who is the blogger and YouTube sensation known as Essiebutton, held a meetup in downtown Toronto. I’ve followed her blog and vlogs for about two years now and I was incredibly excited for the chance to meet her in person.
So Sandra and I jumped on the train and headed downtown, thinking we’d get a bit of shopping in as well. We actually passed Essiebutton a few times in the mall, but we were way too embarrassed to say hi. We wanted to play it cool. And boy did we regret that decision.
So along comes 2:30 and time for the meetup, so we head towards Yonge and Dundas Square, only to find about 300 people there to see her. We expected a significant amount less. And I think she did as well. She definitely seemed overwhelmed. And the crowd went berserk. We actually got pushed out of the way. The massive crowd got kicked out of the square and also kicked out of the Eaton Centre sidewalk area and this massive crowd followed. We were a bit blown away and scared over the whole ordeal. So finally we gave up, thinking we were crushed and that out hopes of meeting Essiebutton we over. We were NOT battling that crowd. If only we’d said hi in the mall.
Yet about an hour and a half later, as I was trying on clothes in Topshop, Sandra discovered via Twitter that Essie was in Nathan Philips Square. And off we went. Through the pouring rain. And lo and behold, there she was surrounded by only 25 people. We got our chance!!
I cannot believe how amazingly down to earth Estée is. She truly is one of the sweetest girls and I give her so much credit for hours of talking and smiling to her followers. As silly and “fan girl-esque” as I felt, I’m really glad we met her!! She even complimented me on my lipstick and asked what it was (MAC Retroglam Matte Relentlessly Red if anyone cares to know)
If you’ve never heard of Essiebutton you MUST check out her blog and YouTube channels. http://www.essiebutton.com and Essiebutton and/or essiebuttonvlogs on YouTube!

Post muddy dog park smiles as we defrost in the car #beaglesofinstagram #dogpark #socold #waterdownontario
Extra thankful for our little pumpkin arriving March 2022.
Too busy sniffing everything to realize we’re walking towards a long weekend!!! 🦃 🎃 🍁 #happythanksgivng #longweekend longweekendvibes #beaglesofinstagram
I missed #internationaldogday but will never stop posting pics of my Stevie. Just look at that face! #beaglesofinstagram #beagles #puppy #puppiesofinstagram